In order to avoid accusing us in pro-Russian or pro-Putin propagadnda, иthe idea of this article is to provide only facts. Any information , stated below has is documentally confirmed and has nothing in common with propaganda. All conclusions are yours.
When since late 2013 “peaceful protests” had been started in Ukraine and western media so admired «brave and socially active Ukrainians», in reality we all were watching the beginning of the new Neo-Nazi and Neo-Fascist Revolution. The first since May 1945. I will try to prove that statement below. And we are talking not only about neo-Nazi slogans, but we talk about broad and generic use of Fascist German ideology and methodology, as the base ideology platform.
Let’s look at narrow facts:
The main driving force in Ukraine, which changed the power and implemented the revolution in Ukraine is the movement “Right Sector”, the party “Svoboda”. Those movements position themselves as successors of Ukrainian Nationalists Organization (UNO). The main icon of those movements is S.Bandera (his portraits are seen at every corner of Maidan in Kiev as well as in the offices of many ministers in Kiev): 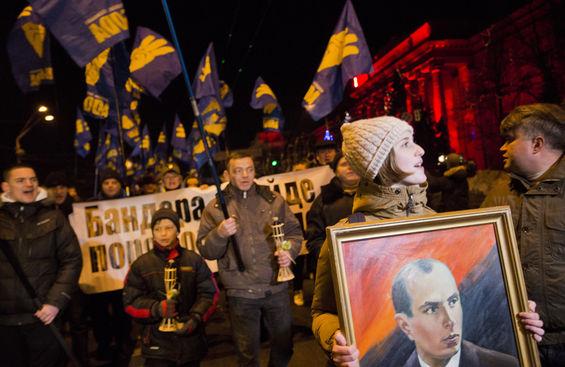 Those people directly define themselves as «Bandera’s Army» (which is equivalent to Division SS «Galitchina»).
There would be nothing wrong, if we wouldn’t talk about the German Fascist Army and if Bandera woulnd’t be the German Fascist Officer.
Bandera was the leader of Ukrainian Nationalist Organization (UNO).
Fascist division “Nachtigal” and later the Nazi division SS “Galichina” were based on UNO and were formed out of UNO members.
The slogan of the UNO was “Kill Jews, Polish and Russian – they are the main enemies”. Those slogans are declared today in Kiev neo-Nazis parades without major modifications.
On June 30th, 1941 Ukrainian nationalists had signed the Act of Cooperation with A. Hitler, where it was written: "…create the new order in Europe and worldwide under A. Hitler command… ".
In 1943 UNO had organized and participated in «Volyn’ Massacre», in which they killed from 50,000 to 80,000 Polish and Jews.
Here are few slogans from that time: 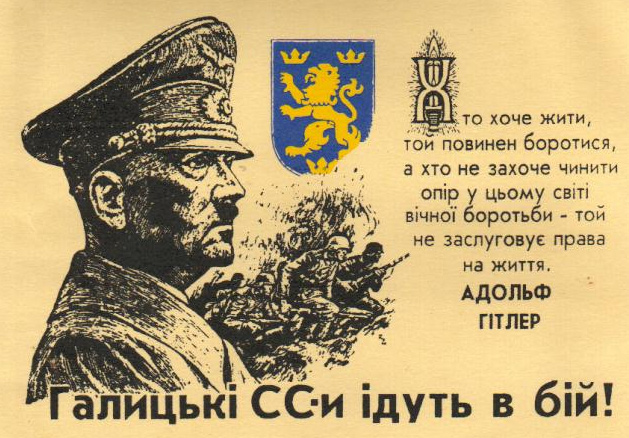 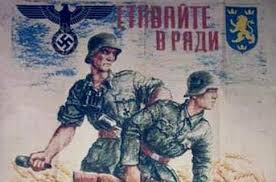 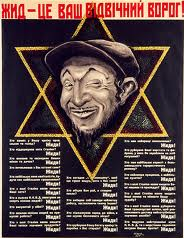 The sign (in Ukrainian): “A Jew is your eternal enemy!”

All that was headed and led by S.Bandera.

That happened. And here it happens again:


And this is the center of Kiev today: 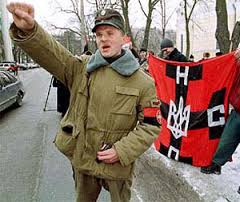 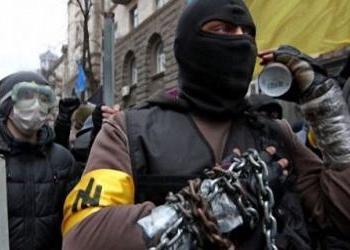 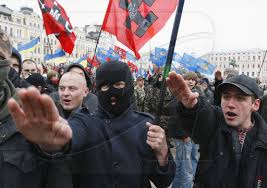 Those people are at Ukrainian government today. Today’s Ukrainian government, which got to the power as the result of the recent revolution has four ministers and the Senior Prosecutor from pro-fascist parties and movements.
The ideology and slogans of today’s UNO have remained unchanged. So, recently created the new Ukrainian armed organization “National Guard” was formed, organized on neo-Nazis. This organization is already called as “Nazi-Guard” by population of the East Ukraine. As 70 years ago, those Nazi-Guards are specialized on extreme cruelty and killing civilians. We will try to bring you more facts and information on that in later articles.

This ash tray was taken by eastern Ukrainian riots from killed Nazi-Guard in Donbass: 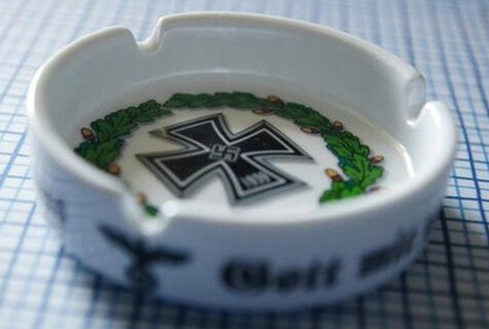 This is the photo of the body of killed Nazi-Guard soldier in Donbass (with Nazi tattoo): 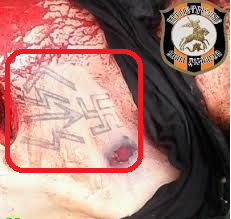 Many people in Ukraine still can’t understand something. And to be honest, me too:
Why the US and Europe governments needed to organize, finance and provide wide support to the raise of neo-Nazis? (there is the entire book of confirming facts…)

I leave the conclusion to your own consideration...